This article is a stub. You can help Drillipedia: The Chuhou Joutai Wiki by expanding it.

Kagami was born as the oldest of two daughters by Hideo Ochiai and Kisumi Torisawa on December 21, 1989. She has a younger sister named Yumi (born 1992).

Drafting into the KRDF[edit | edit source]

Like her father, Ochiai was recruited by Susumu Takajima into the Kozanese Royal Defense Force at the age of 14. 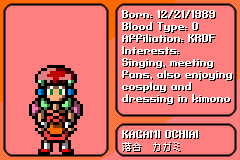 Kagami Ochiai is a pop-idol sensation rumored to be a princess despite a lack of royal blood, though she does descend from the daimyos (feudal lords of Japan), with her grandparents still heading a daimyo family in Kozan. Her interests include singing, meeting fans, cosplay, and dressing in kimono.

Behind the Scenes[edit | edit source]